Our Lady of Fatima University

Established in the year 1967, Our Lady of Fatima University Incorporated (FMSFI) is a private university in the Philippines. The university concentrates mainly on allied medical sciences.

Founded in 1967 by Jose Olivares and his son-in-law, Dr. Vicente M. Santos, the university grew out of Our Lady of Fatima Hospital The hospital became the primary provider of medical and health care services for Valenzuela.

New buildings were established in Valenzuela City and Quezon City, with nursing virtual laboratories and simulators. This paved the way for Fatima’s College of Nursing to be designated by CHED as a Center of Development in late 2008.[4] Fatima’s expansion continued with another campus being established in 2008 in Antipolo.

It is the first and only Philippine medical school to have an institutional clerkship program with a foreign hospital. The university has sent over 100 medical students for clerkship training at the Brooklyn Medical Center and Peninsula Hospital in New York and the Jackson Park Hospital in Chicago. Fatima has graduated more than 30,000 medical and allied medical health practitioners from all disciplines.[10] During the 2011 Physician Licensure Examinations, the university dominated half of the list of top ten board passers.

On July 2011, College of Pharmacy showed exemplary results at the June 2011 licensure examinations as forty students passed the exam and received an over-all passing rate of 89%. The College of Computer Studies (CCS) under the deanship of Dr. Raymond S. Macatangga was also recognized making OLFU the first university in the Philippines to be recognized as a Novell Academic Training Partner (NATP).

The student can apply as per following instructions:
Option 1 : Fill In the Online Application Form
Option 2 : Send us a email to [email protected]

1. Once we get your application we shall write back to you with questions , comments and details.
2. We submit Your Application to the admission committee for international students of university.
3. The University will give us the instruction as to accept the application or reject it.
4. If the University instructs to proceed with the admission of student we intimate you.
5. We do all the formalities and send you the acceptance letter from the University.
6. The students remits the tuition fee to the university account directly.
7. Once the student transfers the tuition fee then he/she shall pay the processing fee to us.
8. Once the acceptance letter is given to the student the student has to submit his passport copy.
9. Then the student applies for the visa in the nearest Embassy/ Consulate of Philippines in your country.
11. The visa is issued and you notify us of the student’s date of journey.
12. The student travels to Philippines to the nearest airport to the University.
13. University officials and our officials shall be there in the airport to receive the student.
14. He/She is put in hostel of the university.
15. The next day the student pays the tuition fee to the international student department and joins the course.
16. If the student has any problems, our officials are there 24 hours to help the student.

Picture Gallery of Our Lady of Fatima University 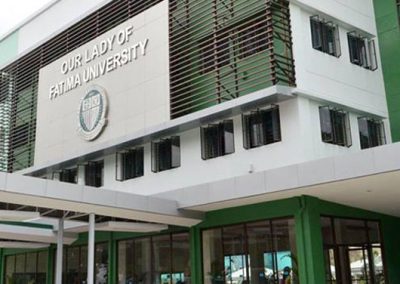 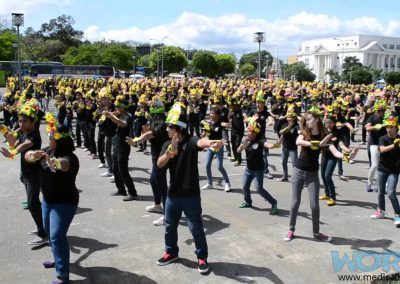 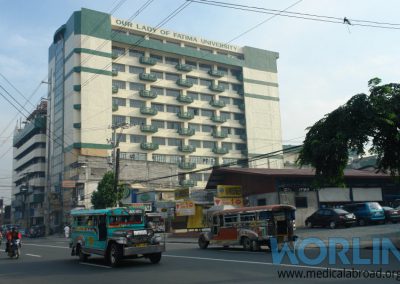